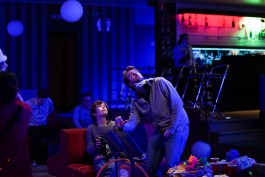 Abel Bos was born on the 12th of October 1991 in Hilversum, The Netherlands. His interest in screenwriting and directing began at the European Film College in Ebeltoft, Denmark, in 2011.  Abel pursued his curiosity at KASK in Ghent, Belgium, where he studied Film from 2012 to 2019.
In 2017 he earned his Bachelor’s degree with his short film ‘Kip’ (Chicken), which received the VAF Wildcard, a prize awarded each year by the Flanders Audiovisual Fund (VAF) for the best student short. Abel graduated with a Master’s degree in 2019 with the short film ‘Vis’ (Fish), winning the Best Scenario Award at the International Film Festival of Oostende. His first professional short film ‘Bug’, produced by Mirage, is currently in post-production and is yet to be released.
Meanwhile, Abel founded the video agency ‘Bosbrand Media’ with his brother. He has also worked in theatre, and as a casting director and assistant for several feature films.