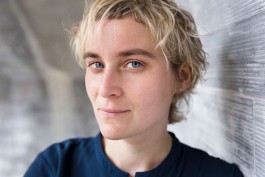 Cecilia Verheyden (°1985) is a Belgium-based filmmaker. In 2007, she graduated from the RITCS School of Arts in Brussels with her award-winning short film Ou Quoi. Since then, she directed several award-winning films and TV series. Her work for television includes wtFOCK, an online hit in Belgium adapted from SKAM, Undercover S2, for Eén and Netflix, and the upcoming high-end series Diamonds, also for Eén and Netflix. Cecilia is also well known for her commercials, which have won several awards at the Cannes Lions Festival over the past ten years.
Cecilia aims to make strong, character driven films that challenge their audience. She loves stories told from a female perspective; stories about family, identity, gender. Skiff, produced by Mirage, will be Cecilia’s third feature film. She directed her debut feature Behind the Clouds in 2016 and her second feature film Ferry for Netflix in 2020.