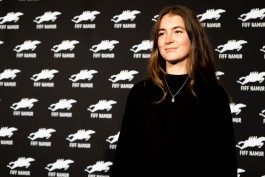 Laura Van Haecke is a Brussels-based filmmaker. She obtained her Master's degree at the Brussels Royal Institute of Theatre, Cinema and Sound (RITCS) in 2016 and graduated with the short film 'Two Opposed' / 'Seul à Seule'. She has several short films, commercials and music videos in her portfolio and combined working in the film industry with a job as a teacher, giving art classes and workshops for kids and teens. This was a source of inspiration during the writing of the short film 'Howling' that premiered at the international competition of Film Fest Gent 2020. ‘Howling’ won the award for 'Best international short' at the prestigious Palm Springs Short Fest, received the press award at Internationaal Kortfilmfestival Leuven, the audience award and jury award for best short film at the JEF film festival and was selected for numerous other international festivals. Laura is co-writer and director of web series HACKED, winner of Best Short Form Series at Canneseries 2022. Currently, Laura is developing a short documentary produced by Mirage.