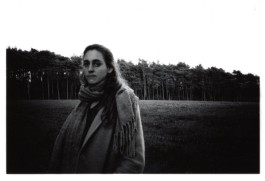 Leni Huyghe is a Brussel-based independent filmmaker, born & raised in Gent, Belgium (1986). Her qualifications include a Master in Audiovisual Arts (LUCA Brussels), along with a Master in International Relations (University of Ghent). Leni is also a Berlinale Talent alumna. Though she also has experience in documentary and experimental film making, fiction is Leni’s main focus. She made five acclaimed shorts which gathered several prizes and travelled to international film festivals such as Cinéfondation Cannes, Visions du Réel and Palm Springs amongst many others. She recently finished a documentary about the Covid crisis at elderly homes for the Belgian public broadcaster Canvas. Leni has directed the second season of HACKED, a web series for adolescents, and is working with producer Elisa Heene (Mirage) on her fiction feature film.